Organic modified polysiloxanes are generally recognized as the newest generic class of high performance protective coatings and materials. They have gained wide ranging commercial acceptance over the last ten years and are now used in a host of applications. In past decades, silicone-acrylates and methacrylates have been widely used in lens materials, textile coatings, leather finishes, architectural coatings, and pressure sensitive adhesives, because of their excellent antifouling and all-weather resistance, their ability to readily be incorporated into aqueous emulsions, as well as their high tolerance across a range of chemicals and temperatures (both high and low).

The most prevalent, commercially available functional polysiloxane materials are the epoxy and acrylic siloxane hybrids.

Gelest methacrylate and acrylate functional silicones undergo the same radical induced polymerization reactions that are generally associated with organic methacrylates and acrylates. The acrylate functional siloxanes cure at a rate ten times faster than their metharcylate counterparts on exposure to UV/EB in the presence of a photoiniator,i.e.benzoin, substituted benzoins, benzophenone, Michler’s ketone, diethoxyacetophenone, etc. Generally, the photointiator concentration will be in the range of 0.1%-5% by weight.

The first acrylic siloxane hybrid material was commercially introduced in the early 1990’s. The high permeability of siloxanes to oxygen makes it necessary to blanket such materials with nitrogen due to the fact that oxygen inhibits the acrylic polymerizations. Metal-organics containing acrylate/methacrylate functionality can also be copolymerized with their organic counterparts. The principal function of all these materials is as modifiers to organic systems.

Gelest epoxycyclohexyl functional siloxanes can also be polymerized on UV/EB exposure in the presence of weak acid donors. Aliphatic epoxy modified polysiloxane materials have been commercially available since the mid 1990s and over 5 million square meters have been used in coatings within Europe alone. Examples of these siloxane hybrid materials and their catalysts offered by Gelest can be seen below.

Gelest, Inc., also offers a series of silicon dioxide precursors that can be cured on exposure to deep UV (<240nm). These materials can be used for dielectric coatings, overcoats for glass and as diffusion barriers.

Mercapto-functional siloxanes can be UV cured in the presence of unsaturated organics. They are effective rust preventatives as they strongly adsorb onto fibers as well as painted surfaces. They readily undergo radical UV initiated addition to unsaturated polymer resins. Such UV thiol-ene reactions have been applied to new polymeric lens materials in the late 80’s and early 90’s, and are now referred to by the more generic term of ‘click chemistry’. Mercaptosiloxanes act as impact modifiers in polymer materials, internal mold release agents for rubber and semipermanent lubricants for automotive weather stripping. Gelest mercapto functional siloxanes can also be used to crosslink vinylsiloxanes undergoing radical UV initiated addition to the unsaturated groups.

Coating technologists have long sought to utilize the properties of inorganic silicon based polymers to improve the properties of organic coatings. Early attempts to combine inorganic silicon materials with organic resins by cold blending were limited by incompatibility of the two materials. With over 10 million square meters applied globally during the past ten years, polysiloxane coatings have gained market share compared to other traditional organic coatings and are perhaps the fastest growing generic coating type. The reasons for the rapid growth of polysiloxane coatings are clear. They offer improved performance properties and cost effectiveness, lower VOC content and improved health and safety features compared to traditional organic counterparts. 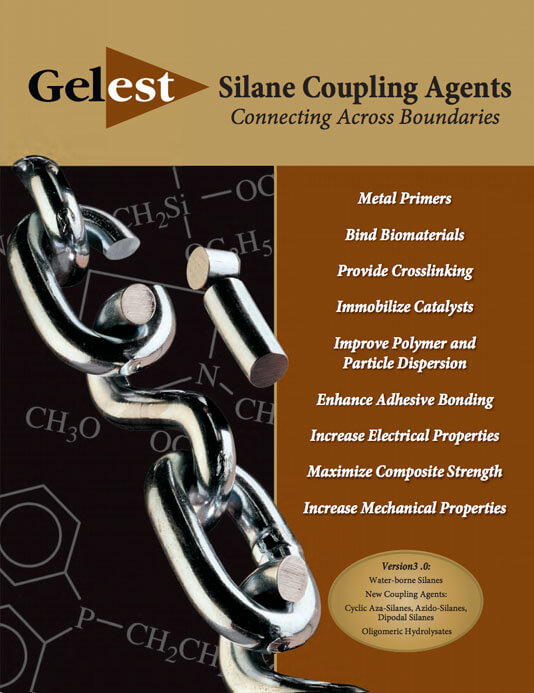