Employed in reductive halogenation of aldehydes and epoxides.1
Used to link ferrocenylsilane, polyolefin block copolymers into stable cylindrical forms.2
Employed in the high-yield reduction of amides to amines in the presence of other reducible groups.3
Reduces anisoles to arenes.4
Hydrosilylates terminal alkynes to form alkenylsilanes capable of cross-coupling w/ aryl and vinyl halides.5
Employed in the reduction of an acetopheone derivative to the methylene in the synthesis of ziprasidone.6

The cross-coupling reaction is a highly useful methodology for the formation of carbon-carbon bonds. It involves two reagents, with one typically being a suitable organometallic reagent - the nucleophile - and the other a suitable organic substrate, normally an unsaturated halide, tosylate or similar - the electrophile.

Organosilanes are hydrocarbon-like and possess the ability to serve as both ionic and free-radical reducing agents. These reagents and their reaction by-products are safer and more easily handled and disposed than many other reducing agents. The metallic nature of silicon and its low electronegativity relative to hydrogen lead to polarization of the Si-H bond yielding a hydridic hydrogen and a milder reducing agent compared to aluminum-, boron-, and other metal-based hydrides. A summary of some key silane reductions are presented in Table 1 of the Silicon-Based Reducing Agents brochure.

The Si-H bond, based on the relative electrongativities of Si and H, is polarised such that the hydrogen is slightly hydridic in nature. The fact that the silanes are not strongly hydridic makes them excellent candidates for mild and selective reductions of organic functional groups.

The Synthesis of Gliflozins – Larson

Some of the general approaches to the key steps in the synthesis of gliflozins, a class of glucose transporters, are discussed. In particular the glycosidation step for the introduction of the key aryl moiety onto the glucose and the reduction steps are presented.  Click here for more product information on tetramethyldisiloxane (TMDO, TMDS) reducing agent. 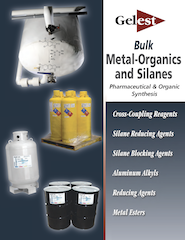 Silicon-based cross-coupling reagents are used for carbon-carbon bond formation and the introduction or aryl, vinyl, and ethynyl groups. 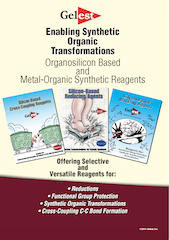