Membranes are barriers that enable ions, molecules or particles to pass through in a selective manner. Polydimethylsiloxane (PDMS) is used as a barrier for liquids and as a permeable path for gaseous elements and compounds.

One of the characteristics of silicon chemistry is that the presence of the silicon atom in polymeric materials leads to higher degrees of gas and vapor permeability. Polydimethylsiloxane membranes are more permeable than non-silicone stable polymers in permeable gas applications. The silicon may be incorporated as a side chain on the polymer backbone, such as substituted vinyl, acetylenic or methacrylate monomers, or as part of the polymer backbone itself, this class of compound being silicone polymers and copolymers. Platinum cured silicone membranes can be used in applications other than gas separation, as their working temperature range is far greater than most organic polymers.  Applications include medical devices, microelectronic devices, construction and water treatment. 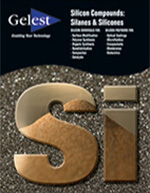